If we are going with themes for each month Month One was really just about getting acquainted with the city, finding our way around, figuring out transportation (aka learning how to ride a bike again), and securing a place to live.

Month Two was all about getting that place to live made into a home! 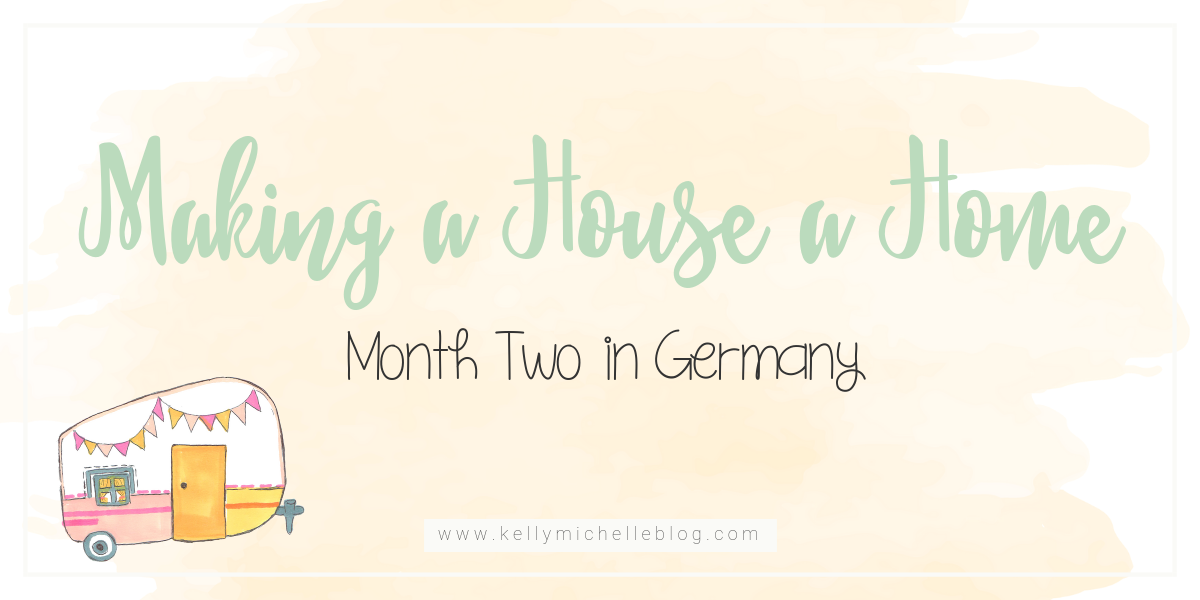 After getting our keys to our flat, the process of cleaning and moving began. I spent a full day at the house cleaning it from top to bottom (which I had planned to be only take me three hours). There was a dog that lived here before and I don’t think the place was ever dusted or swept! 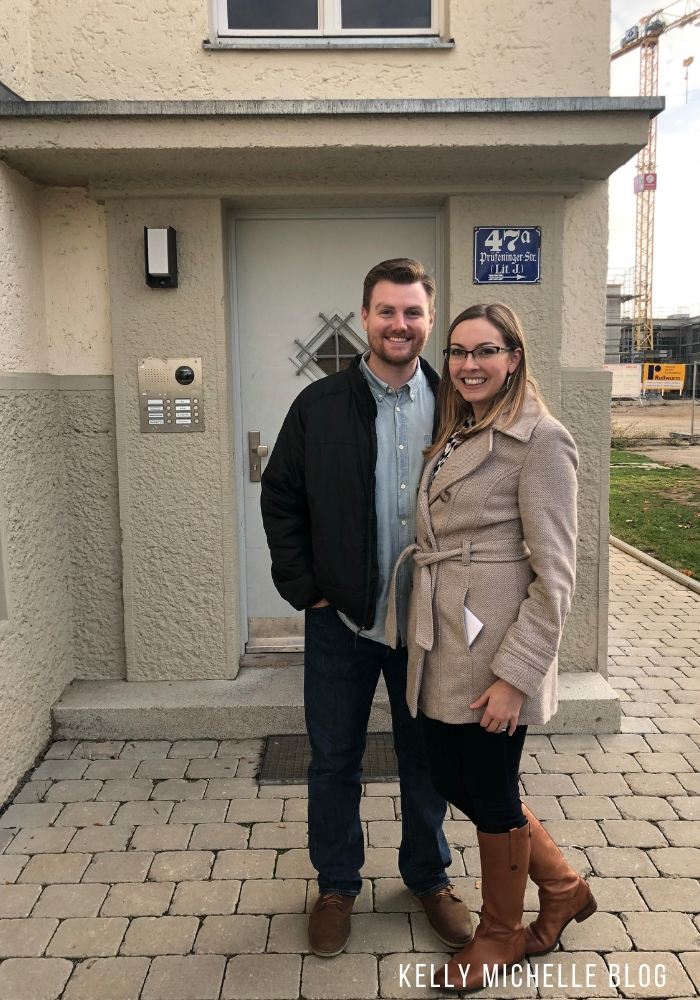 We continued moving things in. Little trips here and there. Big trips at night when Cody was home with the car.

It was amazing how we went from having hardly any possessions at all to having enough stuff to make approximately fifty trips up and down the four flights of stairs.

Here is a quickish tour of our flat as soon as we got the keys!

The first month and a half of being here I really struggled with not having things. And not from a vain stance of “I need things” but more because I realized how our “things” really can help to create a sense of home.

With the exception of my clothes, my computer, and a few pictures I brought over, nothing here was really “mine.”

Even once we began to buy things to furnish our home, again, it didn’t feel like “ours.” It sounds a bit high maintenance typing it but I guess until I went through the process of getting rid of or leaving most of my things behind and having to start over, I didn’t realize how much those things helped to create the home that I loved.

Which, I am learning is really a bigger issue at play here. And that’s the fact that things are never meant to fulfill us. I am learning. One of my favorite podcasters began a series on “home” within a month or two of us moving here. She talked about the spiritual home we have in Jesus versus the physical home we possess here on Earth. I found this series really comforting as I moved through this transition. If you want to listen to that series, you can do so here!  (I believe this was the episode that struck me as I was walking into town, feeling so heavy with emotions, when I felt like God was speaking right to me through her podcast.)

On Wednesday night we finally spent our first night in our new home! The bed was on the floor and I created little bedside tables with the cardboard boxes are glasses came in. 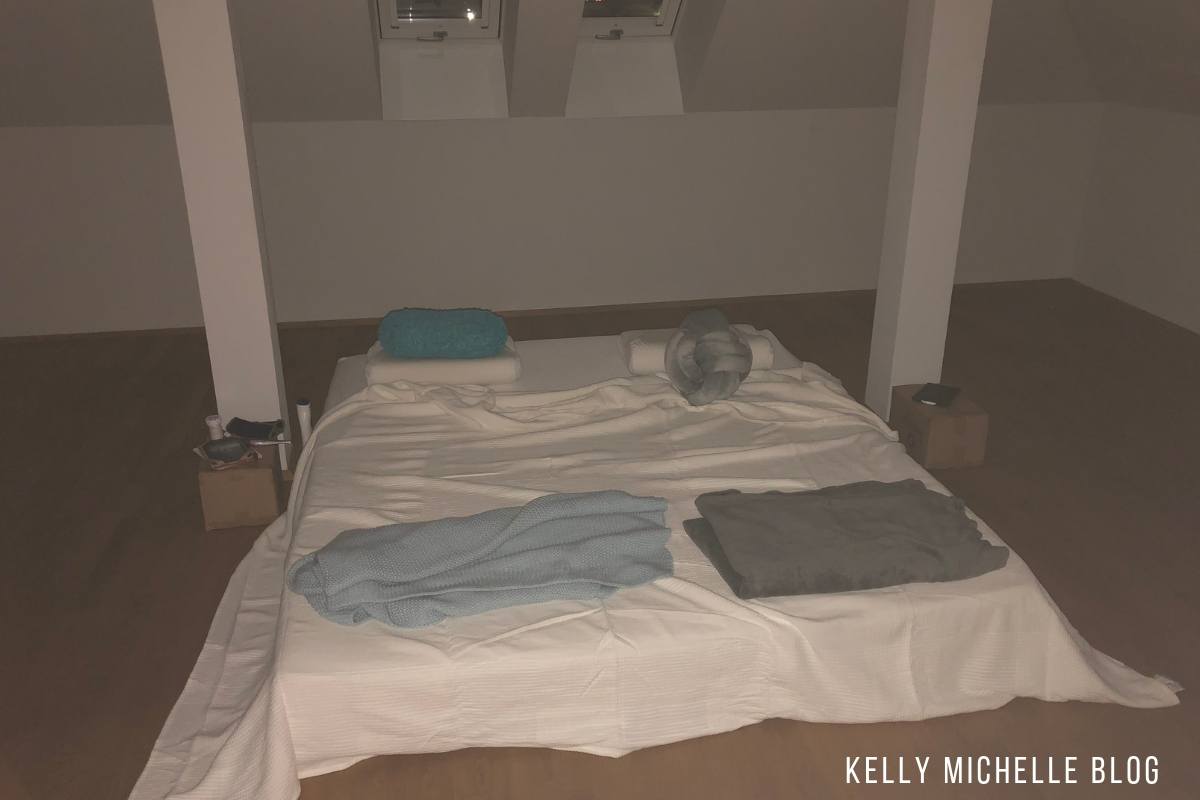 The Dogs Move to Germany

Thursday was a big day because it was time for the dogs to fly! Emily and my Mom tag teamed dog duty after we moved. But on a Thursday morning in November Mom dropped them off for their first international flight!

I was a mess while they flew. And because most flights from the U.S. to Germany involve flying during the German night time, I didn’t sleep much the whole night. I woke up often and checked the flight status to see where they were.

We distracted ourselves Friday by shopping for furniture. We treated ourselves to a delicious croissant and scone from the confectionary across the street- Cafe Opera. And then hit the shops.

The dogs landed in Frankfurt around 9 AM and were released to the Pet Relocation staff member around 11:30 AM.

I didn’t hear from anyone till around noon that day. I kept telling myself “no news is good news” because I was absolutely convinced that Milo had shredded his bed while flying, then while he was eating the stuffing they hit turbulence and he choked and died while flying. (Scout, I wasn’t worried about her. She isn’t DUMB!)

Finally, in the middle of the second furniture store of the day, my phone rang! It was a woman from the German side of Pet Relocation.

The Lady: “The dogs have been released and are with the carrier now, they should be to you in about 4 hours.”

Me though tears: “So they are alive?”

The Lady, snickering: “Yes, they are alive. You were worried they wouldn’t be?”

I hung up the phone and proceeded to sob into Cody’s shoulders. The babies were here! They were alive! They were coming “home.”

Of course, just as we were wrapping up our IKEA trip (third furniture store of the day) and about to start loading all of the things we wanted from the warehouse onto our cart, the phone rang again and the pups were 30 minutes away. Arriving two hours before we planned! (Side note, my German friend just recently told me that in German, the word “pups” means “fart”…)

We ditched our cart and headed to meet them.

Around 3:30 PM a big white van with “LIVE ANIMALS” written across it pulled into the drive. I ran downstairs as the driver was unloading them. Scout was the first one out. So happy to be out of the kennel and be reunited. But immediately following saying hi to us, she ran back to the van to check on Milo (because Scout is a good sister!). Of course, Milo was yelping because he wanted out.

Both pups were released to us (by pups I mean dogs, not farts 😉 ) leashed up and taken potty while Cody handled all the paperwork.

OUR BABIES WERE HERE!!!! I was so happy!

We took them up and let them sniff around the house.

Then we went back down to get their kennels that we left in the driveway.

As we were coming back in, Cody realized that neither of us brought our keys down with us. And because the doors always lock behind you, we were officially locked out of our apartment with our dogs inside.

Luckily our American neighbors below us had told me how to “break in” to the apartment. And they were home to provide the necessary supplies.

Finally we got in! We fed and watered the dogs, then immediately took them on a walk. They were SO happy and so was their Momma! 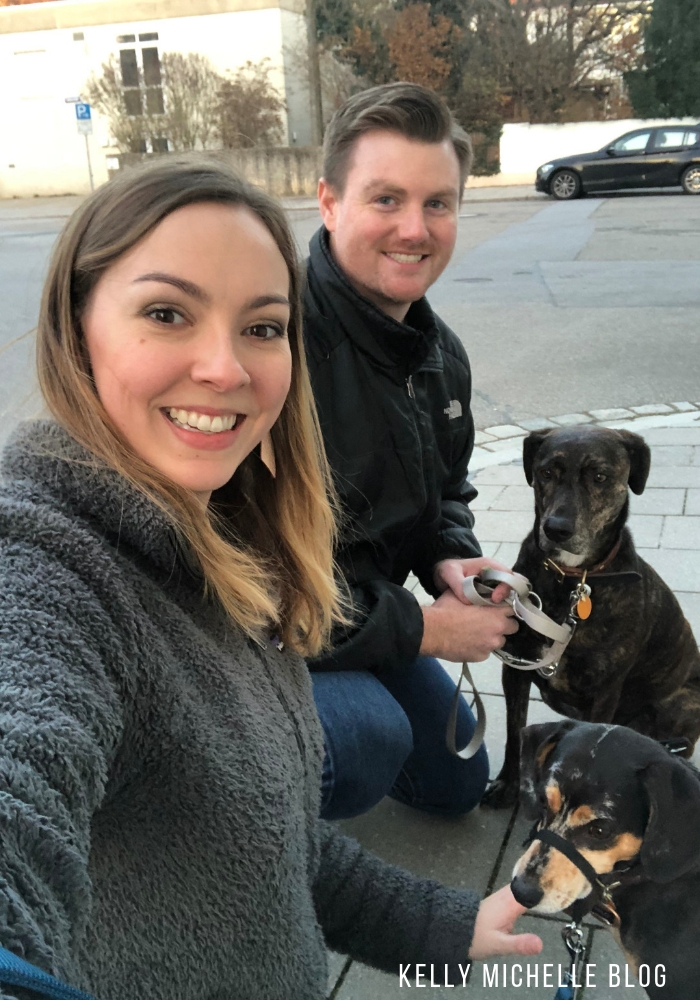 I’ll forever wonder what it was like as they flew “across the pond.” I would have loved to be a “fly on the wall” in that plane. I am so curious what that process was like for them. What they were thinking. What it looked like in there. I’ll never know. I guess it will always be Milo and Scout’s little secret.

Making a Flat a Home

That evening we returned to IKEA and completed our shopping trip. We had three carts full of stuff. And to our great fortune, IKEA delivers TO THE INSIDE OF THE APARTMENT! All the hand raising emojis should be inserted right here! 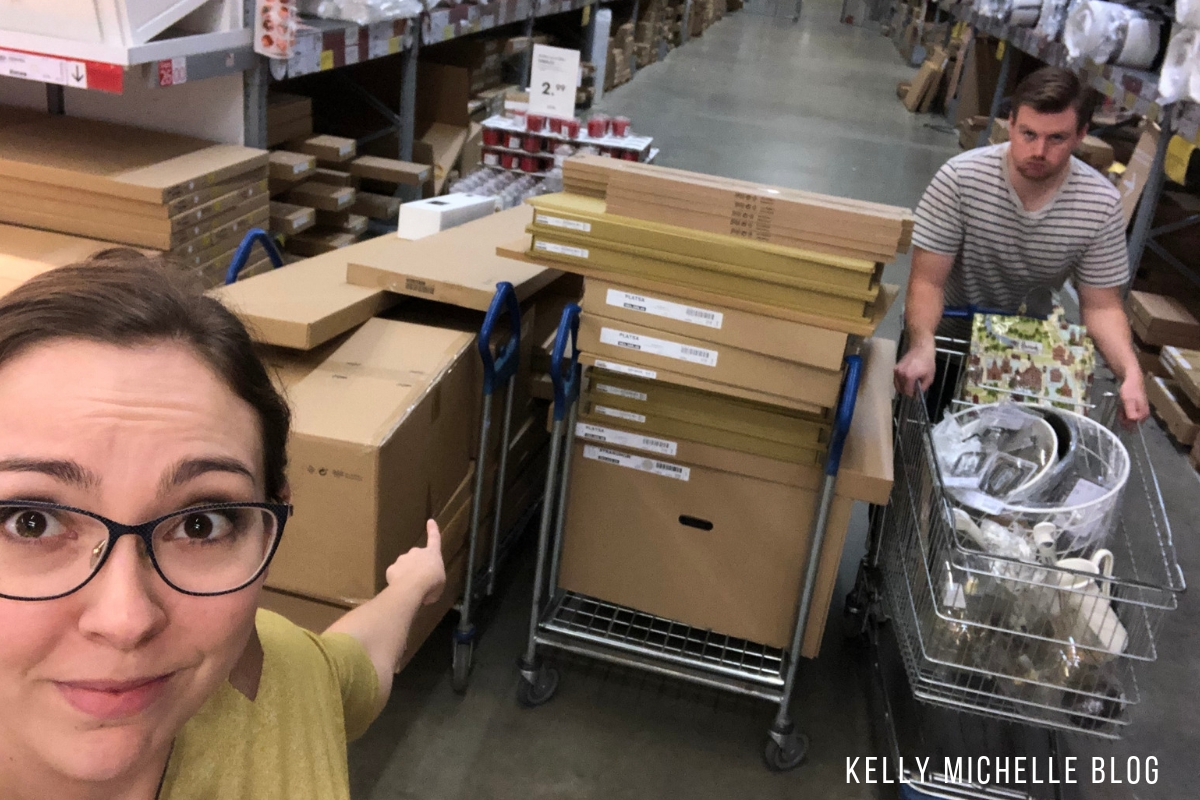 Despite being the second to last patrons to leave the store, we paused on our way out for an ice cream cone and Pepsi. Because we deserved it.

We waited about a week for our furniture. In that time Thanksgiving came and went.

We celebrated our first holiday abroad with our Texas friends, the Masseys. (Actually, New Braunfels friends..small world!) There is a restaurant here, Beach House, that has a very American Menu. They were offering a Thanksgiving meal. And you know it is a true Thanksgiving meal because it was buffet style! You can’t celebrate Thanksgiving without a second trip to the buffet! 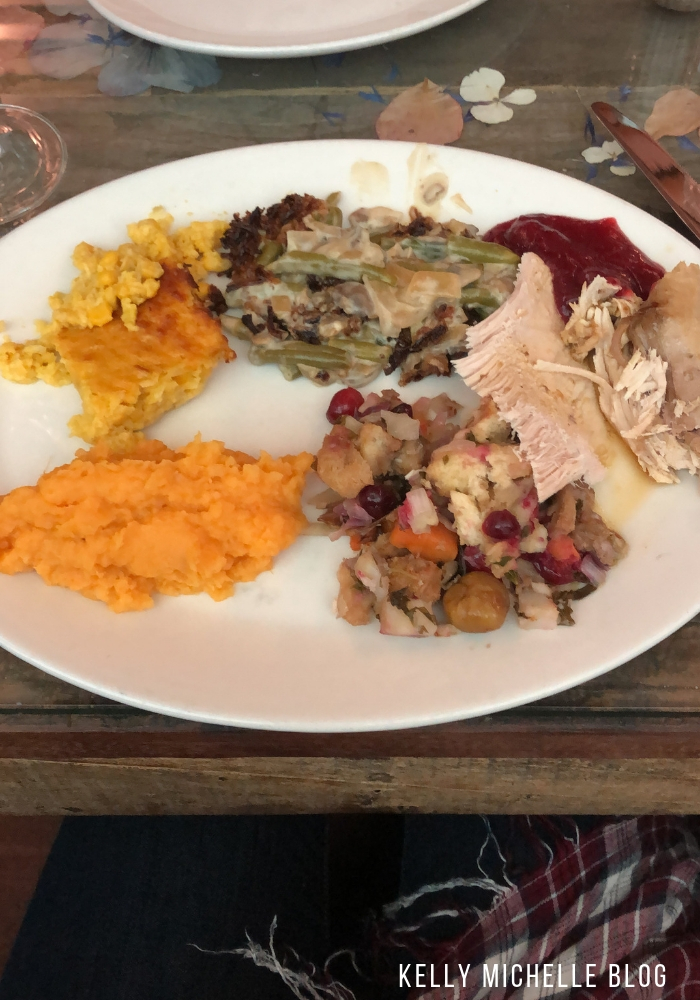 Once the furniture arrived, a week past it’s due date, the assembly began. Cody’s engineer brain loved it. I personally hate that kind of stuff so I stuck to organizing all the things after he assembled it. 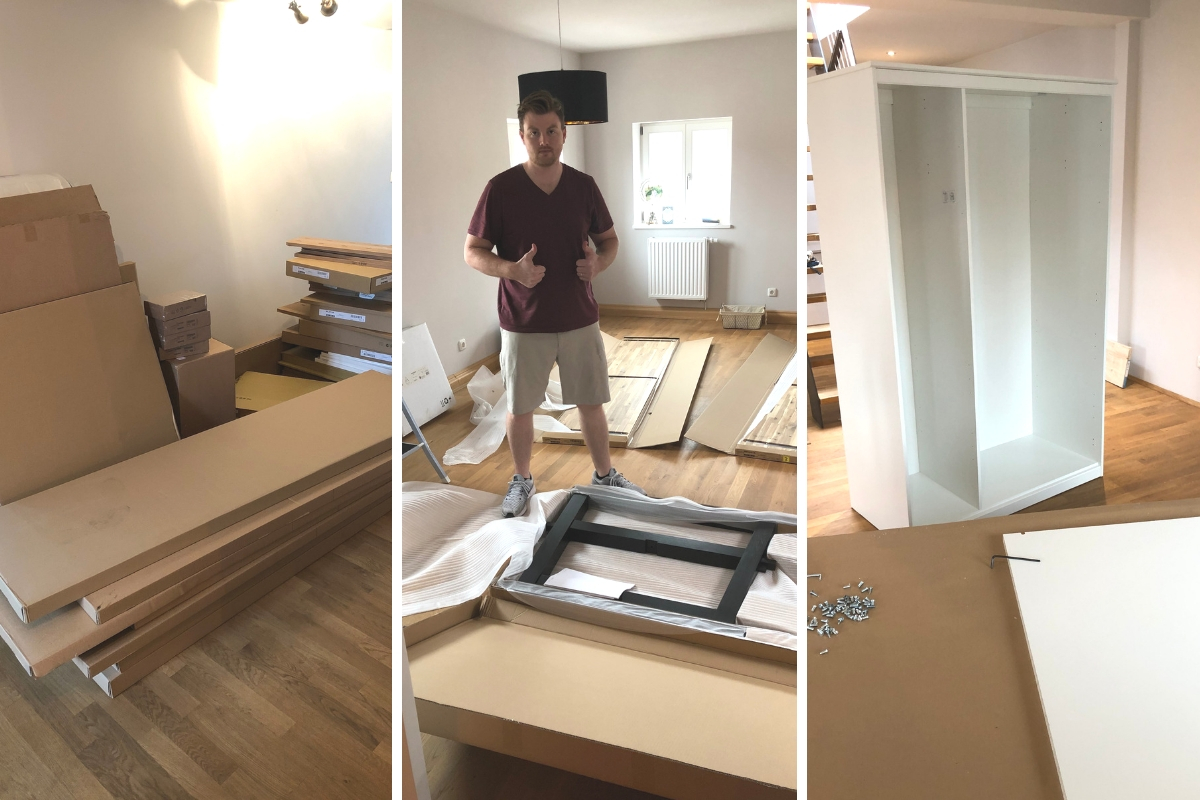 Here is an updated tour of our home, taken just a few days from the first video shared above. At this point, the only furniture pieces we had was our bed and beside tables because we had to take another trip to IKEA the day after the dogs arrived to purchase our bed.

In addition to making our flat a home, we said goodbye to our American neighbors we had for a month. I really feel like having them here our first few weeks of living in our new home was a little gift from God. They were so helpful and kind. And I am sad that they have returned home. (But, very grateful for all the things they left for us- among my favorite, pumpkin pie spice!)

We wrapped up our second month here with “Bring Your Wife to Work Day.”

Not really, but part of the deal for moving here was a cultural training on the German culture. We spent two days at Continental with a Cultural Trainer who coached us on how to understand Germans. It was actually really eye opening and has helped me to not take things the Germans say or do so personal. (Like, the time a German delivery guy made me cry. Or the time when a lady stopped me in a park and yelled at me from like twenty feet away that my dogs could not be in the park.)

With the end of our second month in Germany, Christmas lights began popping up everywhere and the town transformed into a magical place! I write all about our first Christmas in Germany in this post and on Month Three in this post. 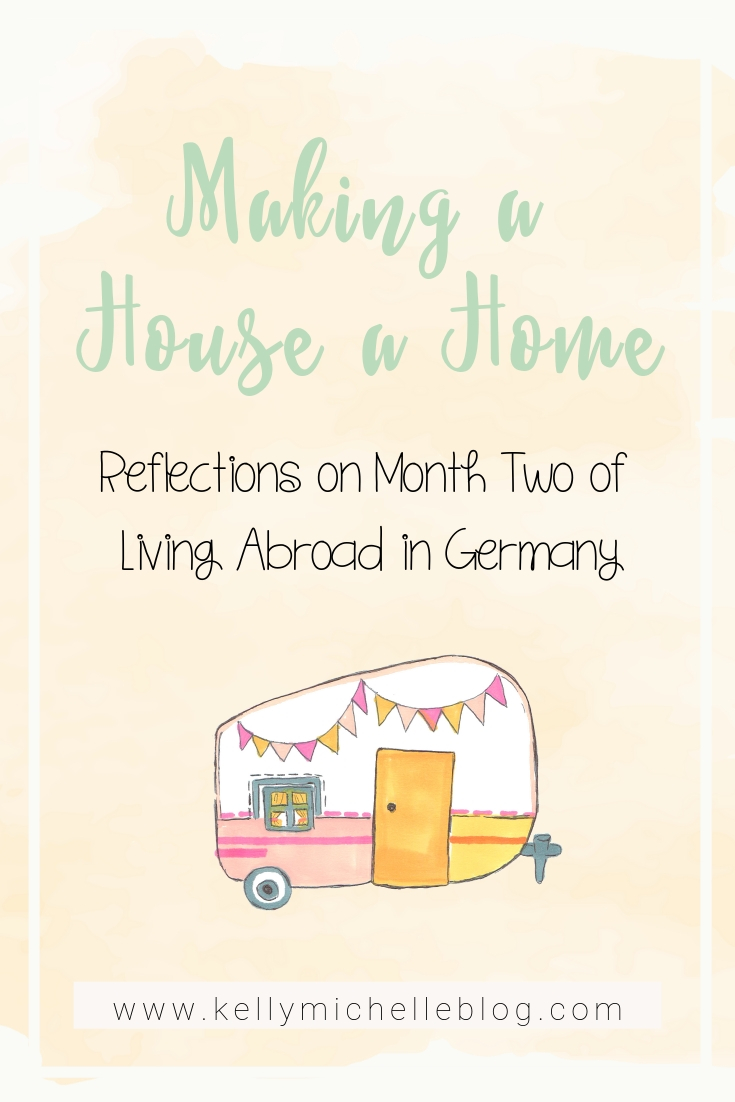